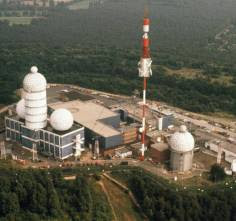 Teufelsberg (Devil's mountain), located in west Berlin, Germany, has a most unique history. With its 375 ft (114 m) it is the highest hill in the Berlin area, and it's man-made! It is made of 12 million cubic meter rubble, from about 400,000 destroyed buildings, during the rebuilt of Berlin after the Second World War.

In the late 1950's, Allied mobile listening post, eavesdropping on East German and Soviet communications, discovered that Teufelsberg was an ideal location, with its unobstructed reception of signals from all directions. In 1961, the US Amry Security Agency (ASA) started their first SIGINT operations out of trucks on top of the hill. Soon after, the first buildings were constructed, and Field Station Teufelsberg gradually grew over the next years to become one of the largest Signals Intelligence (SIGINT) stations ever.

Although Teufelsberg was located in the British sector of Berlin, there was a close cooperation between British and US intelligence. Initially operated by the ASA, the American part of the station came under control of the Army Intelligence and Security Command (INSCOM) in 1977. Since then, the NSA provided most of the personnel and equipment for its ELINT (electronic Intelligence) and SIGINT operations.

With its large antenna park and huge dishes in their radomes, they intercepted East German and Soviet radio communications, directional microwave links and satellite transmissions, and captured and analysed different types of Radar. If it was in the air, they got it. After the fall of the Berlin Wall and the collapse of the Soviet Union, the station became useless and American and British troops abandoned Teufelsberg in 1991.

As if the hill's history wasn't mysterious enough, the secret that lies beneath is just as curious: the Nazi military-technical college, designed by Albert Speer. When the Allies captured Berlin, they tried to demolish it with explosives, which turned out to be impossible. They decided to bury the massive building under a pile of rubble from destroyed Berlin.

That story starts in the 1930's, when Adolf Hitler ordered his chief architect Albert Speer to develop a new Berlin. Nazi Project 'Welthauptstadt Germania' (World Capital Germania) included a huge Olympic stadion, a new Chancellary, an avenue of victory, a triumphal arc and other monumental architecture. Here's a video of how it would look like. In 1937, they started with the first part of the project, the Wehrtechnische Fakultät or military-technical college. Changing priorities during the Second World War halted the project and it was never resumed. Today, there's even an association, called Berlin Unterwelten (underground), that wants to explore the remains of the elite military academy underneath the Teufelsberg.

More about the Teufelsberg SIGINT station on this website. There's also a site with nice panoramic pictures (may take a while to download). Berlin-Brigade has some photo's of the early days of the station. Field Station Berlin Veterans Group (FSBVG) wants to save the Teufelsberg site. To have a birds-eye look on Teufelsberg, start up your Google Earth and type "Berlin Teufelsberg" in the search box. Key in "Bischofsgruen Schneeberg", to fly to another one. With "Brocken Schierke", you'll jump right to the most famous former Soviet station in East Germany. There's also an interesting website of the 13th British Signal Regiment Birgelen Vets, running several intercept stations in Germany during the Cold War. More about US listening stations on US border operations in Germany.

On youtube there are several video's about Teufelsberg and how it looks now. Here's one to start with

As a US Army linguist who was stationed at Field Station Berlin from 1968 - 1971 and worked at Site 3 (our designation for the Teufelsberg site), I view its current graffiti plastered state with mixed emotions. That it is no longer of use and abandoned indicates our role in protecting the city, Germany, and Europe was successful. Still, I do not like to think of it passing without note, like the rubble it rests atop.

For that reason, I support the efforts of the Field Station Berlin Veterans group to preserve at least a portion of it as a remembrance of the site's effectiveness for almost half a century.

Thanks for your comment, Lew. I served for 12 years in Germany myself. I also regret that our old barracks and stations are left to languish. However, we may not forget that we completed the mission very well and achieved half a century of stability in Europe. As for the feelings, I see them as nostalgia, not because of the era of Cold War we worked in, but for the work we did and how we did it.

Hello Dirk, thank you for sharing your thoughts and information on Teufelsberg with others. My name is Adelita, and I am currently working on a project that brings together various interviews of Teufelsberg veterans. I was wondering if you would be interested in participating, please drop me an email to let me know if you would and to know more,

thank you very much,

Arrived here by googling on Teufelberg, nice article. Interesting blog as well, high quality of information! People like you make the internet more interesting, keep up the good work!

Following up on this, a colleague and I have been working with and at the T-berg for the past year. We are archaeologists interested in telling the story of this site through the buildings and fabric that remains. We have written an essay (for publication in June) and have been commissioned to write a book on the subject. Like Adelita we would like to have the opportunity to talk with veterans specifically about how the buildings and rooms were used and for what, and what was the nature of relations between British and US personnel. I would appreciate a contact for the Field Station Berlin Veterans Group, for example. I am at the University of York (UK), on john.schofield@york.ac.uk

My name is Bob Hodgson. I served there from 1983 to 86 as a Spec Op in the Royal Signals. Fantastic time. Outside work there was some fantastic fishing and lots of areas to run in. I think the site should be preserved for posterity.

Quote: It is easy to predict the future as humans excel in repeating their errors from the past.